Like a number of small local historical collections ours has known some moments when circumstances combined to create a situation where some portion of the collection was put at risk.

While stored the lower level of Maynard Town Hall for over 30 years there were at least two events where water damaged some portion of the collection.   In a very real sense, the last event, which occurred in January 2008, set in motion the current preservation plan that we are now on (supported by both member funding and Maynard CPA funds).

For over three years now we have been slowly but steadily bringing our collection of Maynard’s history into a better state of preservation:  documents and photographs are being stored in a manner consistent with modern archival practices, the collection is being cataloged and digitized, and we have the use of a building that is providing us with reasonably safe storage.   This is all good.

It isn’t perfect, and given our limited resources it probably will never be.  But that doesn’t mean that we shouldn’t prepare for those confluences of circumstances that always rise up to bite you in the butt.    The recent tornado that ravaged several towns just 60 miles to our west a few months ago was a bit of a wake-up call for me.  Following the tornado I was working in the collection room and thought “what would happen”.

While the MHS doesn’t have a formal disaster preparedness plan, our conservation survey and plan does dip into that territory a bit and now we’re taking a few more steps.

Many of our storage racks are near windows.  A direct hit by a tornado could scatter our history over a large swath of the commonwealth.  Not good and unfortunately there’s not a lot we can do about that at the current time.  Our space has lots of windows and unless someone wants to throw a LOT of money at us, we’ll have to live with that risk.  Fortunately the risk is incredibly low. 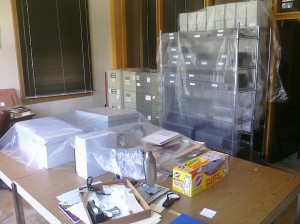 Which brings us to today — and we have the threat of a Category 2 hurricane (Irene) washing over us in the next 48 hours.  Current forecasts show a larger threat of rain rather than wind damage.   We’re on the second floor so flooding is not a real concern — but the roof leaking is.  [Note: The roof leaking threat is only there because we might get a LOT of rain in a short amount of time, creating a unique situation — we’ve had no issues with the roof leaking in the three years we’ve been here.] 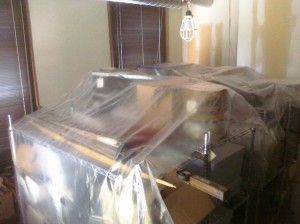 So, for a small investment we thought it would be a good idea to put some plastic sheeting over the collection.   About 80% of the collection (and probably 90% of the documents/photographs) now has something over them.   Most of what is exposed would survive getting wet and we’ll keep a close eye on the building anyways.  We may even try to get the rest covered in the next 48 hours but there’s a bunch of diminishing returns at play (e.g., there are things on the floor that we simply have no way of getting off the floor, so if water comes in they are going to get wet.)

Our collection represents the combined efforts of hundreds of people spanning the past 150 years.   Our overriding goal as a historical society is to make sure that the “stories of Maynard”, which are held in the words, photographs, and artifacts that we manage are preserved for the future generations and we’re doing everything we can to make sure that happens.

One thought on “Preservation requires Preparation”

News and stories from the Maynard Historical Society in Maynard, Massachusetts