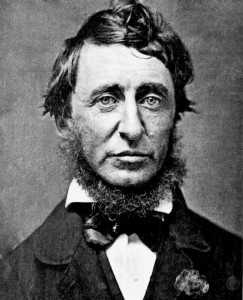 On June 12th, 7pm at the Maynard Public Library, the Historical Society is pleased to host “Thoreau on Slavery in America”

Historical interpreter Richard Smith will reprise Thoreau’s lecture “Slavery In Massachusetts.” This re-enactment in 2014 will commemorate the 50th anniversary of the passing of the Civil Rights Act enacted on July 2nd 1964 . Designed for all ages, this program will bring to life Thoreau’s singular observations and concerns about social justice in a new nation. This presentation will conclude with a lively Q&A with Richard Smith about how and why Thoreau ideas and actions remains relevant today.

In the decades before the Civil War began, New England men and women participated in the abolitionist movement by joining the American Anti-Slavery Society, subscribing to a weekly newspaper, The Liberator, attending rallies, defying authorities and helping escaped slaves on their courageous journeys toward Canada. Henry David Thoreau supported the anti-slavery cause in both word and action. He and his family gave temporary sanctuary in their home to fugitives heading north. Thoreau wrote essays and delivered several anti-slavery public lectures. His most famous one was “Slavery in Massachusetts,” which he delivered at a famous rally in Framingham on July 4, 1854. Thoreau was also the first American to publicly support radical abolitionist John Brown with another renowned lecture, “Plea For Captain John Brown”.

This timely Thoreau program series has been presented state-wide by Freedom’s Way and the Maynard program is made possible by a generous grant by the Maynard Cultural Council.

Help spread the word: download flyer for the program.

News and stories from the Maynard Historical Society in Maynard, Massachusetts